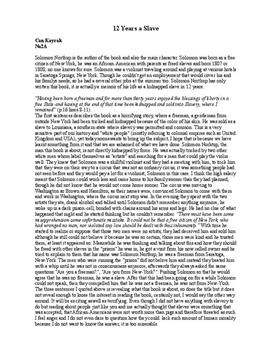 Solomon Northup is the author of the book and also the main character. Solomon was born as a free citizen of New York, he was an African-American with parents as freed slaves and born 1807 or 1808, no one knows for sure. Solomon was a violinist traveling around and playing at various hotels in Saratoga Springs, New York. Though he couldn't get an employement that would cover his and his familys needs, so he had a several other jobs at the summer too. Solomon Northup has only written this book, it is actually a memoir of his life as a kidnapped slave in 12 years.

"Having been born a freeman and for more than thirty years enjoyed the blessings of liberty in a free State-and having at the end of that time been kidnapped and sold into Slavery, where I remained" (p.16 lines 8-11).
The first sentences describes the book as a horrifying story, where a freeman, a gentleman from outside New York had been tricked and kidnapped because of the color of his skin. He was sold as a slave to Louisiana, a southern-state where slavery was permitted and common. This is a very ...... Köp tillgång för att läsa mer Redan medlem? Logga in