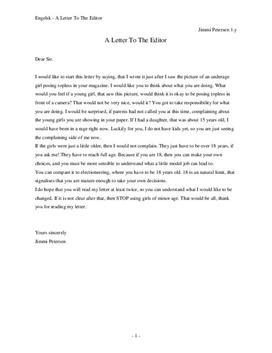 I would like to start this letter by saying, that I wrote it just after I saw the picture of an underage girl posing topless in your magazine. I would like you to think about what you are doing. What would you feel if a young girl, that saw this picture, would think it is okay to be posing topless in front of a camera? That would not be very nice, would it? You got to take responsibility for what you are doing. I would be surprised, if parents had not called you at this time, complaining about the young girls you are showing in your paper. If I had a daughter, that was about 15 years old, I would have been in a rage right now. Luckily for you, I do not have kids yet, so you are just seeing the complaining side of me now.
If the girls were just a little older, then I would not... Köp tillgång för att läsa mer Redan medlem? Logga in

Material relaterade till Letter to the Editor - Topless Girls | Brev.