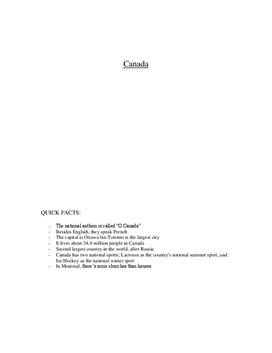 - Quick Facts
- How the country is ruled
- Geography
- Sports

QUICK FACTS:
- The national anthem is called “O Canada”
- Besides English, they speak French
- The capital is Ottawa but Toronto is the largest city
- It lives about 34,4 million people in Canada
- Second largest country in the world, after Russia
- Canada has two national sports; Lacrosse as the country's national summer sport, and Ice Hockey as the national winter sport
- In Montreal, there's more churches than houses

How the country is ruled:
Canada is an old English colony and there are still traces after it, Canada has monarchy and it's Queen Elizabeth II (England's queen) who's the monarch since 1952.
The country has strong democratic traditions that they uphold with a parliamentary government.
Canada is divided into thirteen states, ten provinces and three territories. Every province has their own government and parliament. The territories are not very populated and they are not as independent as the provinces... Köp tillgång för att läsa mer Redan medlem? Logga in