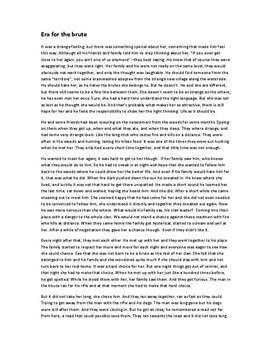 "It was a strange feeling, but there was something special about her, something that made him feel this way. Although all his friends and family told him to stop thinking about her, “If you even get close to her again, you ain't one of us anymore” –they kept saying. He knew that of course they were exaggerating, but they were right. Her family and his were not really on the same level, they would obviously not work together, and only the thought was laughable. He should find someone from the same “territory”, not some brainwashed adoptee from the strange new village along the waterside."... Köp tillgång för att läsa mer Redan medlem? Logga in

Material relaterade till Novell | Era for the Brute | Engelska.