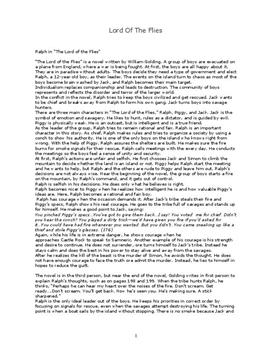 Lord of the Flies: Ralph | Analys

“The Lord of the Flies” is a novel written by William Golding. A group of boys are evacuated on a plane from England, where a war is being fought. At first, the boys are all happy about it. They are in paradise without adults. The boys decide they need a type of government and elect Ralph, a 12-year old boy, as their leader. The events on the island turn to chaos as most of the boys become brain washed by Jack, and Ralph becomes their main target.
Individualism replaces companionship and leads to destruction. The community of boys represents and reflects the disorder and terror of the larger world.
In the conflict in the novel, Ralph tries to keep the boys civilized and get rescued. Jack wants to be chief and breaks away from Ralph to form his own gang. Jack turns boys into savage hunters.
There are three main characters in “The Lord of the Flies,” Ralph, Piggy, and Jack. Jack is the symbol of emotion and savagery. He likes to hunt, rules as a dictator, and is guided by evil. Piggy is physically weak. He is an outcast, but is intelligent and is a true friend.
As the leader of the group, Ralph tries to remain rational and fair. Ralph is an important character in this story. As... Köp tillgång för att läsa mer Redan medlem? Logga in

Material relaterade till Lord of the Flies: Ralph | Analys.