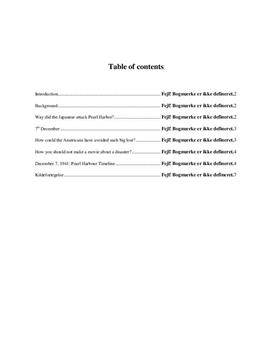 How could the Americans have avoided such big lost? 3

How you should not make a movie about a disaster? 4

Introduction
There have been a lot of terrible disasters in the years that have past and there are still relatives to some of the people who were killed in the disasters (Titanic, Pearl Harbor, Vietnam…). Is it all right to make a movie or just tell about it and make money on a disaster that has cost thousands of lives? The people who find it as an easy way to earn money do not think of the relatives who it is hard for to just think about and now they are forced to think about it! We though it could be interesting to see if we were the only two people in the world that felt this way. We will use the Internet to find the information.
We will also find information about, how the Americans could have made the lost much smaller.

Background
Pearl Harbor was established as an U.S. naval base in 1908, and remains a vital part of the U.S. defence establishment today. Pearl Harbor is a national historic landmark because of its essential contribution to the rise of the U.S. as a major power in the Pacific and the crucial role it played in World War II, beginning with the December 7th attack. Included in this virtual tour are structures and locations of architectural and historic interest that were important on the day of the attack and during the war years that followed.

Between the middle of the 19th century and the beginning of the 20th, Japan transformed itself from a closed feudal society to a modern industrial and military power. In the 1930s, under the increasing influence of their military, Japan embarked on a series of conquests. With the start of World War II in Europe, resource-poor Japan saw an opportunity to seize European colonies in Southeast Asia with its resources of oil, coal, rubber, and tin.
Relations with the United States had been deteriorating since Japan took Peking in 1937. Because of rising tensions and continued Japanese aggression, the U.S. moved its Pacific Fleet to Hawaii in the spring of 1940. In July, the U.S. placed restrictions on shipments of oil and other war material to Japan. In July 1941, the U.S and other nations froze all Japanese assets. Rather than change its expansionist policies, Japan chose war with the United States to protect its territorial gains.
While diplomatic efforts were underway to resolve differences with Washington, naval planners in Japan were considering an attack on Hawaii ..... Köp tillgång för att läsa mer Redan medlem? Logga in