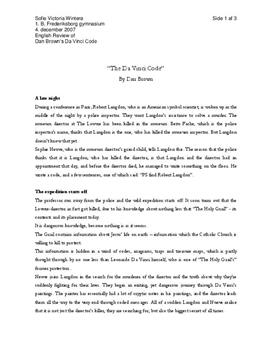 A late night
The expedition starts off
Brilliant – yet not the best of Brown's
Truth or fiction?

A late night
During a conference in Paris; Robert Langdon, who is an American symbol scientist, is woken up in the middle of the night by a police inspector. They want Langdon's assistance to solve a murder. The museum director at The Louvre has been killed in the museum. Bezu Fache, which is the police inspector's name, thinks that Langdon is the one, who has killed the museum inspector. But Langdon doesn't know that yet.
Sophie Neuve, who is the museum director's grand child, tells Langdon this. The reason that the police thinks that it is Langdon, who has killed the director, is that Langdon and the director had an appointment that day, and before the director died, he managed to write something on the floor. He wrote a code, and a few sentences, one of which said: “PS find Robert Langdon”.