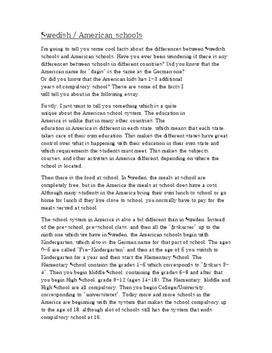 I'm going to tell you some cool facts about the differences between Swedish schools and American schools. Have you ever been wondering if there is any differences between schools in different countries? Did you know that the American name for ”dagis” is the same as the German one? Or did you know that the American kids has 1-3 additional years of compulsory school? These are some of the facts I will tell you about in the following essay.
Firstly, I just want to tell you something which is a quite unique about the American school system. The education in America is unlike that in many other countries. The education in America is different in each state, which means that each state takes care of their own education. This makes the different states have great control over what is happening... Köp tillgång för att läsa mer Redan medlem? Logga in