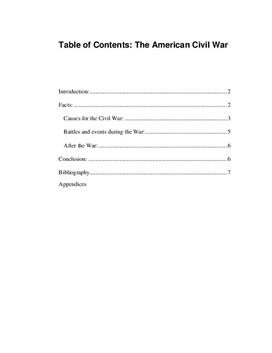 Introduction:
This report will look into the facts leading to The American Civil War 1861 – 1865 and the causes for over ½ million Americans death. The report will be focused on the events leading to the emancipation of the slavery in the southern states of America. However, the report will be composed with an examination starting with some facts about the civil war this will be focused on the division between north and south. The report will start with the causes for the civil war. Then followed by the battles and the events during this war, finally this report is going to brief shortly about the time after the civil war.

Facts:
The American Civil War started with a separation of the country. The country was separated in North and South. These to “nations” had their own flags. However, the south changed their flag during the war. The Northern states had a population of 2,803,300 people, this were a huge advantage compared to the south, which counted 1,064,200 people. The total loss of soldiers from the North was 359,528 soldiers, and compared to the South the northern part of the country had suffered the greatest loss of human lives, the South lost 198,524 soldiers.

Causes for the Civil War:
Everything happens for a reason. And so did the American Civil War. However, there were not only one particularly reason for this war, although it is told that the use of slavery in south played a great role. It is to be discussed whether the disagreement regarding the use of slaves to hard labor where the main cause for this war, or not. However, this disagreement started a division of America, where several of the southern States seceded from the rest of the United States. The motivation for this secession was the protection of the economic in... Köp tillgång för att läsa mer Redan medlem? Logga in