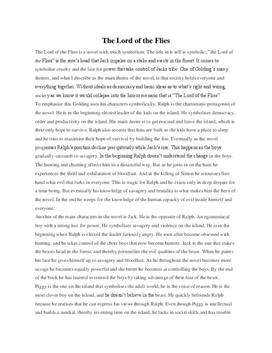 Lord of the Flies | Analys

The Lord of the Flies is a novel with much symbolism. The title in it self is symbolic; “the Lord of the Flies” is the sow's head that Jack impales on a stake and erects in the forest. It comes to symbolise cruelty and the lust for power that take control of Jacks tribe. One of Golding's many themes, and what I describe as the main theme of the novel, is that society holds everyone and everything together. Without ideals as democracy and basic ideas as to what's right and wrong, society as we know it would collapse into the horror scenario that is “The Lord of the Flies”.
To emphasize this Golding uses his characters symbolically. Ralph is the charismatic protagonist of the novel. He is in the beginning elected leader of the kids on the island. He symbolises democracy, order and productivity on the... Köp tillgång för att läsa mer Redan medlem? Logga in

Material relaterade till Lord of the Flies | Analys.