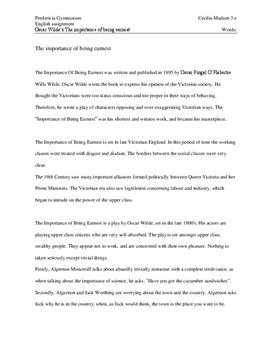 The importance of being earnest | Bokanalys

The Importance Of Being Earnest was written and published in 1895 by Oscar Fingal O'Flahertie Wills Wilde. Oscar Wilde wrote the book to express his opinion of the Victorian society. He thought the Victorians were too status conscious and too proper in their ways of behaving. Therefore, he wrote a play of characters opposing and over exaggerating Victorian ways. The “Importance of Being Earnest” was his shortest and wittiest work, and became his masterpiece.

The Importance of Being Earnest is set in late Victorian England. In this period of time the working classes were treated with disgust and disdain. The borders between the social classes were very clear.
The 19th Century saw many important alliances formed politically between Queen Victoria and her Prime Ministers. The Victorian era also saw legislation concerning labour and industry, which began to intrude on the power of the upper class.

The Importance of Being Earnest is a play by Oscar Wilde, set in the late 1800's. His actors are playing upper class citizens who are very self-absorbed. The play is set amongst upper class, wealthy people. They appear not to work, and are concerned... Köp tillgång för att läsa mer Redan medlem? Logga in

Material relaterade till The importance of being earnest | Bokanalys.