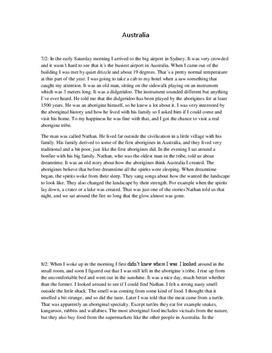 7/2: In the early Saturday morning I arrived to the big airport in Sydney. It was very crowded and it wasn´t hard to see that it´s the busiest airport in Australia. When I came out of the building I was met by quiet drizzle and about 19 degrees. That´s a pretty normal temperature at this part of the year. I was going to take a cab to my hotel when a saw something that caught my attention. It was an old man, sitting on the sidewalk playing on an instrument which was 3 meters long. It was a didgeridoo. The instrument sounded different but anything I´ve ever heard. He told me that the didgeridoo has been played by the aborigines for at least 1500 years. He was an aborigine himself, so he knew a lot about it. I was very interested by the aboriginal history and how he lived with his family so I asked him if I could come and visit his home. To my happiness he was fine with that, and I got the chance to visit a real aborigine tribe.

The man was called Nathan. He lived far outside the civilization in a little village with his family. His family derived to some of the first aborigines in Australia, and they lived very traditional and a bit poor, just like the first aborigines did. In the evening I sat around a... Köp tillgång för att läsa mer Redan medlem? Logga in

Material relaterade till Trip to Australia (Resa till Australien) | Dagbok.