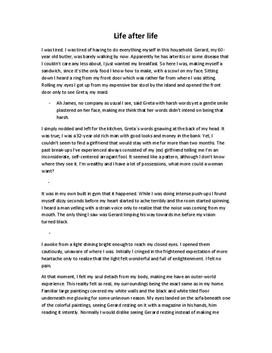 A Near Death Experience | Elevnovell

I was tired. I was tired of having to do everything myself in this household. Gerard, my 60-year old butler, was barely walking by now. Apparently he has arteritis or some disease that I couldn't care any less about, I just wanted my breakfast. So here I was, making myself a sandwich, since it's the only food I know how to make, with a scowl on my face. Sitting down I heard a ring from my front door which was rather far from where I was sitting. Rolling my eyes I got up from my expensive bar stool by the island and opened the front door only to see Greta, my maid.
- Ah James, no company as usual I see, said Greta with harsh words yet a gentle smile plastered on her face, making me think that her words didn't intend on being that harsh.
I simply nodded and left for the kitchen, Greta´s words gnawing at the back of my head. It was true; I was a 32-year old rich man with good looks and money in the bank. Yet, I couldn't seem to find a girlfriend that would stay with me for more than two months. The past break-ups I've experienced always consisted of my (ex) girlfriend telling me I'm an inconsiderate, self-centered arrogant fool. It seemed like a pattern, although I don't know where they see it. I'm wealthy and I have a lot of possessions, what more could a woman want?
-
It was in my own built in gym that it happened. While I was doing intense push-ups I found myself dizzy seconds before my heart started to ache terribly and the room started spinning. I heard a man yelling with a strain voice only to realize that the noise... Köp tillgång för att läsa mer Redan medlem? Logga in

Material relaterade till A Near Death Experience | Elevnovell.