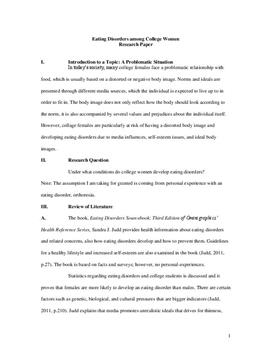 I. Introduction to a Topic: A Problematic Situation
In today's society, many college females face a problematic relationship with food, which is usually based on a distorted or negative body image. Norms and ideals are presented through different media sources, which the individual is expected to live up to in order to fit in. The body image does not only reflect how the body should look according to the norm, it is also accompanied by several values and prejudices about the individual itself. However, collage females are particularly at risk of having a distorted body image and developing eating disorders due to media influences, self-esteem issues, and ideal body images.

Under what conditions do college women develop eating disorders?
Note: The assumption I am taking for granted is coming from personal experience with an eating disorder, orthorexia.

A. The book, Eating Disorders Sourcebook: Third Edition of Ominigraphics' Health Reference Series, Sandra J. Judd provides health information about eating disorders and related concerns, also how eating disorders develop and how to prevent them. Guidelines for a healthy lifestyle and increased self-esteem are also examined in the book (Judd, 2011, p.27). The book is based on facts and surveys; however, no personal-experiences. Statistics regarding eating disorders and college students is discussed and it proves that females are more likely to develop an eating disorder than males. There are certain factors such as genetic, biological, and cultural pressures that are bigger indicators (Judd, 2011, p.210). Judd explains that media promotes unrealistic ideals that drives for thinness, which causes distorted body images. Moreover, 70 to 94 percent of the women in college want to lose weight and 60 percent have disordered eating behaviors. The book also examines that some causes for developing eating disorders can have to do with the big transition, from moving away from home and from new social pressure.
In addition to this, females' attitudes and self-esteem are also discussed. Females tend to be more likely to take after media's stereotypes. When females have a negative body image, they tend to feel bad about themselves, which can cause frustration, feelings of self-devaluation, depression, and ..... Köp tillgång för att läsa mer Redan medlem? Logga in