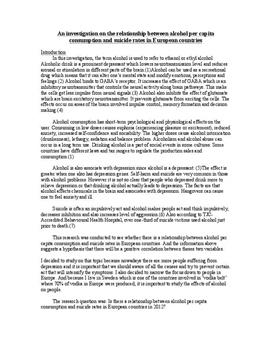 Introduction
In this investigation, the term alcohol is used to refer to ethanol or ethyl alcohol. Alcoholic drink is a prominent depressant which lowers neurotransmission level and reduces arousal or stimulation in different parts of the brain.(1)Alcohol can be used as a recreational drug which means that it can alter one's mental state and modify emotions, perceptions and feelings.(2) Alcohol binds to GABA's receptor. It increases the effect of GABA which is an inhibitory neurotransmitter that controls the neural activity along brain pathways. This make the cells get less impulse from neural signals.(3) Alcohol also inhibits the effect of glutamate which are brain excitatory neurotransmitter. It prevents glutamate from exciting the cells. The effects occur on areas of the brain involved impulse control, memory formation and decision making.(4)

Alcohol consumption has short-term psychological and physiological effects on the user. Consuming in low doses causes euphoria (experiencing pleasure or excitement), reduced anxiety, increased self-confidence and sociability. The higher doses cause alcohol intoxication (drunkenness), lethargy, sedation and balance problem. Alcoholism and alcohol abuse can occur in a long term use. Drinking alcohol is a part of social events in some cultures. Some countries have different laws and tax ranges to regulate the production sales and consumption.(1)

Alcohol is also associate with depression since alcohol is a depressant. (5)The effect is greater when one also has depression genes. Self-harm and suicide are very common in those with alcohol problems. However it is not so clear that people who depressed drink more to relieve depression or that drinking alcohol actually leads to depression. The facts are that alcohol affects chemicals in the brain and associates with depression. Hangovers can cause one to feel anxiety and ill.

Suicide is often an impulsively act and alcohol makes people act and think impulsively, decreases inhibition and also increases level of aggression.(6) Also according to TJCAccredited Behavioural Health Hospital, over one-third of suicide victims used alcohol just prior to death.(7)

This research was conducted to see whether there is a relationship between alcohol per capita consumption and suicide rates in European countries. And the information above suggests a hypothesis that there will be a positive correlation between theses two variables.

I decided to study on this topic because nowadays there are more people suffering from depression and it is important that we should aware of all the causes and try to prevent certain act that will intensify the symptoms. I also decided to narrow the focus ..... Köp tillgång för att läsa mer Redan medlem? Logga in