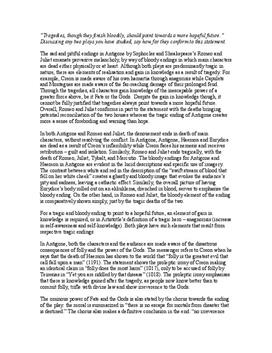 Eleven svarar på frågan:
“Tragedies, though they finish bloodily, should point towards a more hopeful future.” Discussing any two plays you have studied, say how far they conform to this statement.

The sad and pitiful endings in Antigone by Sophocles and Sheakepeare's Romeo and Juliet emanate pervasive melancholy, by way of bloody endings in which main characters are dead either physically or at heart. Although both plays are predominantly tragic in nature, there are elements of realisation and gain in knowledge as a result of tragedy. For example, Creon is made aware of his own hamartia through anagorisis while Capulets and Montagues are made aware of the far-reaching damage of their prolonged feud. Through the tragedies, all characters gain knowledge of the inescapable power of a greater force above, be it Fate or the Gods. Despite the gain in knowledge though, it cannot be fully justified that tragedies always point towards a more hopeful future. Overall, Romeo and Juliet conforms in part to the statement with the deaths bringing potential reconciliation of the two houses whereas the tragic ending of Antigone creates more a sense of foreboding and warning than hope.

In both Antigone and Romeo and Juliet, the denouement ends in death of main characters, without resolving the conflict. In Antigone, Antigone, Haemon and Eurydice are dead as a result of Creon's inflexibility while Creon faces his nemesis and receives retribution – guilt and isolation. Similarly, Romeo and Juliet ends tragically, with the death of Romeo, Juliet, Tybalt, and Mercutio. The bloody endings for Antigone and Haemon in Antigone are evident in the lucid descriptions and specific use of imagery. The contrast between white and red in the description of the “swift stream of blood that fell on her white cheek” creates a ghastly and bloody image that evokes the audience's pity and sadness, leaving a cathartic effect. Similarly, the overall picture of having Eurydice's body rolled out on an ekkuklema, drenched in blood, serves to emphasise the bloody ending. On the other hand, in Romeo and Juliet, the bloody element of the ending is comparatively shown simply, just by the tragic deaths of the two.

For a tragic and bloody ending to point to a hopeful future, an element of gain in knowledge is required, or in Artistotle's definition of a tragic hero – anagnorisis (increase in self-awareness and self-knowledge). Both plays have such elements that result from respective tragic endings:

In Antigone, both the characters and the audience are made aware of the disastrous consequences of folly and the power of the Gods. The messenger refers to Creon when he says that the death of Haemon has shown to the world that ...... Köp tillgång för att läsa mer Redan medlem? Logga in