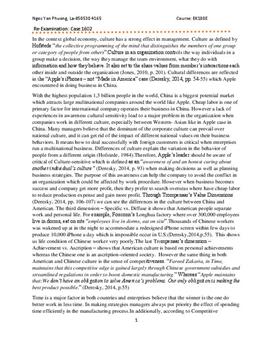 Apple's iPhones – not made in America | Inlämningsuppgift

In the context global economy, culture has a strong effect in management. Culture as defined by Hofstede “the collective programming of the mind that distinguishes the members of one group or category of people from others”.Culture in an organization controls the way individuals in a group make a decision, the way they manage the team environment, what they do with information and how they behave. It also set to the share values from member's interactions each other inside and outside the organization (Jones, 2010, p. 201). Cultural differences are reflected in the “Apple's iPhones – not “Made in America” case (Deresky, 2014, pp. 54-55) which Apple encountered in doing business in China.
With the highest population 1,3 billion people in the world, China is a biggest potential market which attracts large multinational companies around the world like Apple. Cheap labor is one of primary factor for international company operates their business in China. However a lack of experiences in awareness cultural sensitivity lead to a major problem in the organization when companies work in different culture, especially between Western- Asian like in Apple case in China. Many managers believe that the dominant of ..... Köp tillgång för att läsa mer Redan medlem? Logga in

Material relaterade till Apple's iPhones – not made in America | Inlämningsuppgift.