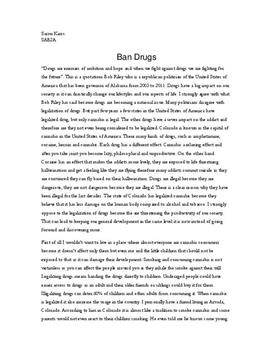 Thirdly the state of Colorado legalized cannabis believing and arguing that it can be used as medicine to cure and prevent symptoms or disease such as cancer and also as stress and depression reliever. As stated in Toxipedia Marijuana contains around 400 chemicals and can the therefore not be used as medicine. Medicines have to be a pure single chemicals so that the impact on the human body can be predictable and controlled also they have to undergo in many clinical trials. Cannabis is still being tested clinically and therefore it is still not knows how every chemical out of 400 is going affect the human body. Therefore why should it even be considered to be legalized when the consequences are yet to be known.
On the other hand the states of America that have legalized cannbis, strongly believe that cannabis has less harm than tobacco and alcohol. It is true that Marijuana has less damage to lungs compared tobacco but that is not the only factor that makes it alright to be consumed. It does not damage lungs but it damages your neurological system and the 400 chemicals have a lot of harm to the human body that scientist are yet not able to point out. And the governor of Colorado also argues that it is sufficiently cheaper to legalize cannabis than to fight against it. The main idea in legalizing it is to tax it. As stated in Huffington Post (2014), as of october has Colorado brought in more than $40 million dollars from the taxes. I believe that governor of Colorado is a very diligent and capable businessman and entrepreneur but very bad governor. You can not sell the health of your citizens for economical reasons... Köp tillgång för att läsa mer Redan medlem? Logga in