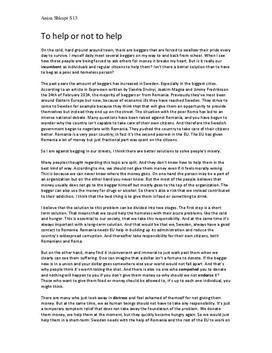 Beggars (tiggare): To Help or Not To Help | Diskuterande text

On the cold, hard ground around town, there are beggars that are forced to swallow their pride every day to survive. I myself daily meet several beggars on my way to and back from school. When I see how these people are being forced to ask others for money it breaks my heart. But is it really our incumbent as individuals and regular citizens to help them? Isn't there a better solution than to have to beg as a poor and homeless person?

The past years the amount of beggars has increased in Sweden. Especially in the biggest cities. According to an article in Expressen written by Sandra Divinyi, Joakim Magna and Jimmy Fredriksson the 24th of February 2014, the majority of beggars or from Romania. Previously they've most been around Eastern Europe but now, because of economic ills they have reached Sweden. They strive to come to Sweden for example because they think that that will give them an opportunity to provide themselves but instead they end up on the street. The situation with the poor Roma has led to an intense national debate. Many questions have been raised against Romania, and you have begun to wonder why the country isn't capable to take care of their own citizens. And therefore the Swedish government began to negotiate with... Köp tillgång för att läsa mer Redan medlem? Logga in

Material relaterade till Beggars (tiggare): To Help or Not To Help | Diskuterande text.