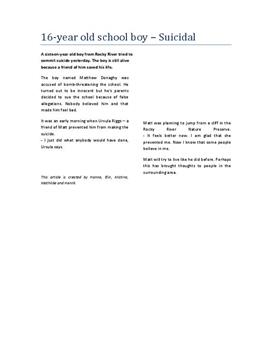 A sixteen-year old boy from Rocky River tried to commit suicide yesterday. The boy is still alive because a friend of him saved his life.
The boy named Matthew Donaghy was accused of bomb-threatening the school. He turned out to be innocent but he's parents decided to sue the school because of false allegations. Nobody believed him and that made him feel bad.
It was an early morning when Ursula Riggs – a friend of Matt prevented him from making the suicide.
- I just did what anybody would have done, Ursula says.

Matt was planning to jump from a cliff in the Rocky River Nature Preserve. - It feels better now. I am glad that she prevented me. Now I know that some people believe in me.

Matt will try to live like he did before. Perhaps this has brought thoughts to people in... Köp tillgång för att läsa mer Redan medlem? Logga in