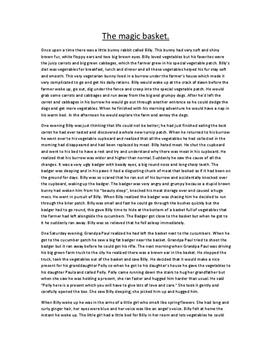 Once upon a time there was a little bunny rabbit called Billy. This bunny had very soft and shiny brown fur, white floppy ears and two big brown eyes. Billy loved vegetables but his favorites were the juicy carrots and big green cabbages, which the farmer grew in his special vegetable patch. Billy's diet was vegetables for breakfast, lunch and dinner and all those vegetables helped his fur stay soft and smooth. This very vegetarian bunny lived in a burrow under the farmer's house which made it very complicated to go and get his daily rations. Billy would wake up at the crack of dawn before the farmer woke up, go out, dig under the fence and creep into the special vegetable patch. He would grab some carrots and cabbages and run away from the big and grumpy dogs. After he'd left the carrot and cabbages in his burrow he would go out through another entrance so he could dodge the dogs and get more vegetables. When he finished with his morning adventure he would have a nap in his warm bed. In the afternoon he would explore the farm and annoy the..... Köp tillgång för att läsa mer Redan medlem? Logga in