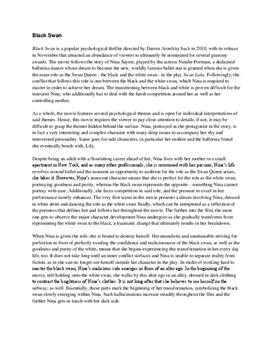 Black Swan is a popular psychological thriller directed by Darren Aronfsky back in 2010, with its release in November that attracted an abundance of viewers to ultimately be nominated for several grammy awards. The movie follows the story of Nina Sayers, played by the actress Natalie Portman, a dedicated ballerina dancer whose dream to become the new, worldly famous ballet star is granted when she is given the main role as the Swan Queen - the black and the white swan - in the play Swan Lake. Followingly, the conflict that follows this role is one between the black and the white swan, which Nina is required to master in order to achieve her dream. The transitioning between black and white is proven difficult for the innocent Nina, who additionally has to deal with the harsh competition around her as well as her controlling mother.

As a whole, the movie features several psychological themes and is open for individual interpretations of said themes. Hence, this movie requires the viewer to pay close attention to details; if not, it may be difficult to grasp the themes hidden behind the surface. Nina, portrayed as the protagonist in the story, is in fact a very interesting and complex character with many deep issues to accompany her shy and... Köp tillgång för att läsa mer Redan medlem? Logga in