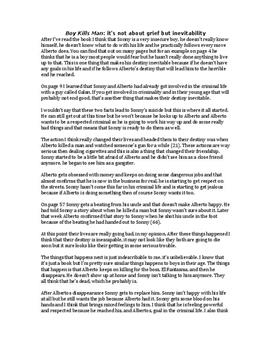 After I've read the book I think that Sonny is a very insecure boy, he doesn't really know himself, he doesn't know what to do with his life and he practically follows every move Alberto does. You can find that out on many pages but for an example on page 4 he thinks that he is a boy most people would fear but he hasn't really done anything to live up to that. This is one thing that makes his destiny inevitable because if he doesn't have any goals in his life and if he follows Alberto's destiny that will lead him to the horrible end he reached.

On page 9 I learned that Sonny and Alberto had already got involved in the criminal life with a guy called Galan. If you get involved in criminality and in their young age that will probably not end good, that's another thing that makes their destiny inevitable... Köp tillgång för att läsa mer Redan medlem? Logga in