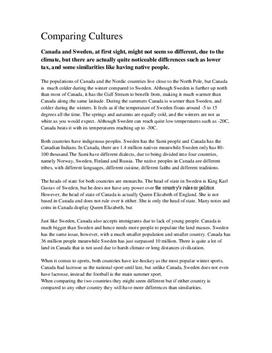 Canada and Sweden, at first sight, might not seem so different, due to the climate, but there are actually quite noticeable differences such as lower tax, and some similarities like having native people.

The populations of Canada and the Nordic countries live close to the North Pole, but Canada is much colder during the winter compared to Sweden. Although Sweden is further up north than most of Canada, it has the Gulf Stream to benefit from, making it much warmer than Canada along the same latitude. During the summers Canada is warmer than Sweden, and colder... Köp tillgång för att läsa mer Redan medlem? Logga in