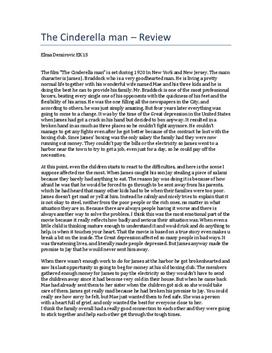 Well done Elma! Your review is well written, relevant and interesting.
Your language is good as well. Next time you do an assignment like this one, try to focus more on reflection and less on the plot.

At this point, even the children starts to react to the difficulties, and here is the scene I suppose affected me the most. When James caught his son Jay stealing a piece of salami because they barely had anything to eat. The reason Jay was doing it is because of how afraid he was that he would be forced to go through to be sent away from his parents, which he had heard that many other kids had to be when their families were too poor. James doesn't get mad or yell at him. Instead he calmly and nicely tries to explain that it is not okay to steel, neither from the poor people or the rich ones, no matter... Köp tillgång för att läsa mer Redan medlem? Logga in