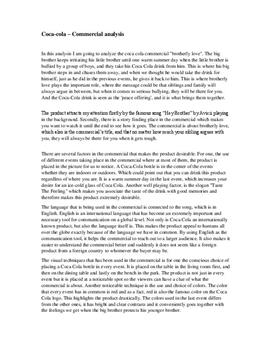 In this analysis I am going to analyze the coca cola commercial "brotherly love". The big brother keeps irritating his little brother until one warm summer day when the little brother is bullied by a group of boys, and they take his Coca Cola drink from him. This is where his big brother steps in and chases them away, and when we thought he would take the drink for himself, just as he did in the previous events, he gives it back to him. This is where brotherly love plays the important role, where the message could be that siblings and family will always argue in between, but when it comes to serious bullying, they will be there for you. And the Coca-Cola drink is seen as the 'peace offering', and it is what brings them together.

The product attracts my attention firstly by the famous song “Hey Brother” by Avicii playing in the background. Secondly, there is a story finding place in the commercial which makes you want to watch it until the... Köp tillgång för att läsa mer Redan medlem? Logga in