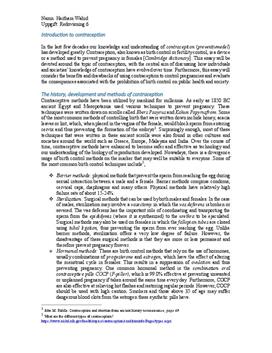 In the last few decades our knowledge and understanding of contraception (preventivmedel) has developed greatly. Contraception, also known as birth control or fertility control, is a device or a method used to prevent pregnancy in females [Cambridge dictionary]. This essay will be devoted around the topic of contraception, with the central aim of discussing how individuals and societies' knowledge of contraception have evolved over time. Furthermore, this essay will consider the benefits and drawbacks of using contraception to control pregnancies and evaluate the consequences associated with the prohibition of birth control on public health and society.

The history, development and methods of contraception

Contraceptive methods have been utilized by mankind for millennia. As early as 1850 BC ancient Egypt and Mesopotamia used various techniques to prevent pregnancy. These techniques were written down on scrolls called Ebers Paoyrus and Kahun Papyrusfrom. Some of the most common methods of controlling birth that were written down include honey, acacia leaves or lint, which, when placed in the vagina of the female, would block sperm from entering ... Köp tillgång för att läsa mer Redan medlem? Logga in