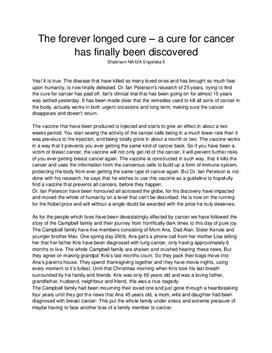 Yes! It is true. The disease that have killed so many loved ones and has brought so much fear upon humanity, is now finally defeated. Dr. Ian Peterson's research of 25 years, trying to find the cure for cancer has paid off. Ian's clinical trial that has been going on for almost 15 years was settled yesterday. It has been made clear that the remedies used to kill all sorts of cancer in the body, actually works in both urgent occasions and long term, making sure the cancer disappears and doesn't return.

The vaccine that have been produced is injected and starts to give an effect in about a two weeks period. You start seeing the activity of the cancer cells being in a much lower rate than it was previous to the injection, and being totally gone in about a month or two. The... Köp tillgång för att läsa mer Redan medlem? Logga in