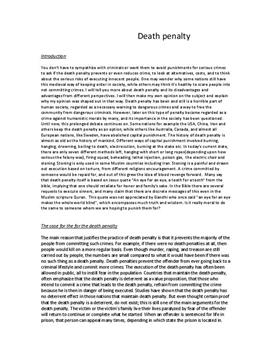 You don't have to sympathize with criminals or want them to avoid punishments for serious crimes to ask if the death penalty prevents or even reduces crime, to look at alternatives, costs, and to think about the serious risks of executing innocent people. One may wonder why some nations still have this medieval way of keeping order in society, while others may think it's healthy to scare people into not committing crimes. I will tell you more about death penalty and its disadvantages and advantages from different perspectives. I will then make my own opinion on the subject and explain why my opinion was shaped out in that way. Death penalty has been and still is a horrible part of human society, regarded as a necessary warning to dangerous crimes and a way to free the community from dangerous criminals. However, later on this type of penalty became regarded as a crime against humanistic morals by many, and its importance in the society has been questioned. Until now, this prolonged debate continues on. Some nations for example the USA, China, Iran and others keep the death penalty as an option, while others like Australia, Canada, and almost all European nations, like Sweden, have abolished capital punishment. The history of death penalty is almost as old as the history of mankind. Different ways of capital punishment involved burning, hanging, drowning, boiling to death, electrocution, burning at the stake etc."... Köp tillgång för att läsa mer Redan medlem? Logga in