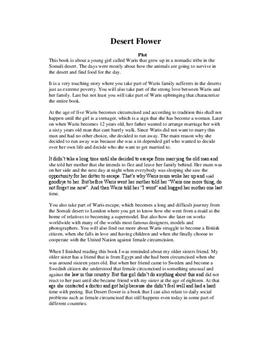 That is a really good text and I agree that Waris is a person that means a lot to many people today.

Plot
This book is about a young girl called Waris that grew up in a nomadic tribe in the Somali desert. The days were mostly about how the animals are going to survive in the desert and find food for the day.

It is a very touching story where you take part of Waris family sufferers in the deserts just as extreme poverty. You will also take part of the strong love between Waris and her family. Last but not least you will take part of Waris upbringing that characterize the entire book.

At the age of five Waris becomes circumcised and according to tradition this shall not happen until the girl is a teenager, which is a sign that she has become a woman. Later on when Waris becomes 12 years old, her father wanted to arrange marriage her with a sixty years old man that cant barely walk. Since Waris did not want to marry this man and had no other choice, she decided to run away. The main reason why she decided to run away was because she was a in depended girl who wanted to decide over her own life and decide who she want to get married to.

It didn't take a long time until she decided to escape from marrying the old man and she told her mother that she intends to flee and leave her family behind. Her mum was on her side and the next day at night when everybody was sleeping she saw ... Köp tillgång för att läsa mer Redan medlem? Logga in