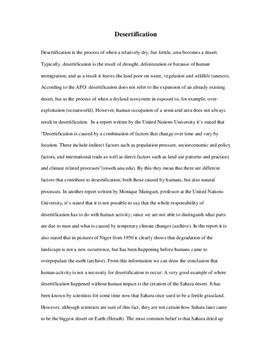 "Good and nuanced. explains well how the process happens and how it effect those in the area. well done"

Desertification is the process of when a relatively dry, but fertile, area becomes a desert. Typically, desertification is the result of drought, deforestation or because of human immigration; and as a result it leaves the land poor on water, vegetation and wildlife (unesco). According to the AFO: desertification does not refer to the expansion of an already existing desert, but to the process of when a dryland ecosystem in exposed to, for example, over-exploitation (oceanworld). However, human occupation of a semi-arid area does not always result in desertification. In a report written by the United Nations University it's stated that “Desertification is caused by a combination of factors that change over time and vary by location. These include indirect factors such as population pressure, socioeconomic and policy factors, and international trade as well as direct factors such as land use patterns and practices and climate related processes”(inweh.unu.edu). By this they mean that there are different factors that contribute to desertification; both those caused by humans, but also natural processes. In another report written by Monique Mainguet, professor at the United Nations University, it's stated that it is not possible to say that the whole responsibility of desertification has to do with human activity; since we are not able to distinguish what parts are due to man and what is caused by temporary climate changes (archive). In the report it is also stated that in pictures of Niger from 1950 it clearly shows that degradation of the landscape is not a new occurrence, but has been happening... Köp tillgång för att läsa mer Redan medlem? Logga in