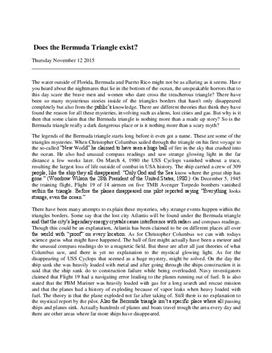 The legends of the Bermuda triangle starts long before it even got a name. These are some of the triangles mysteries. When Christopher Columbus sailed through the triangle on his first voyage to the so-called ”New World” he claimed to have seen a huge ball of fire in the sky that crashed into the ocean. He also had unusual compass readings and saw strange glowing light in the far distance a few weeks later. On March 4, 1980 the USS Cyclops vanished without a trace, resulting the largest loss of life outside of combat in USA history. The ship carried a crew of 309 people, like the... Köp tillgång för att läsa mer Redan medlem? Logga in

Material relaterade till Does the Bermuda Triangle Exist? | Article.