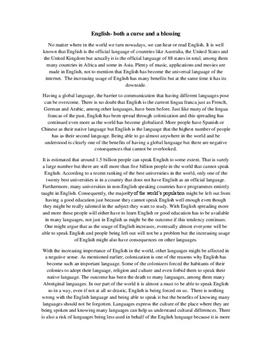 No matter where in the world we turn nowadays, we can hear or read English. It is well known that English is the official language of countries like Australia, the United States and the United Kingdom but actually it is the official language of 88 states in total, among them many countries in Africa and some in Asia. Plenty of music, applications and movies are made in English, not to mention that English has become the universal language of the internet. The increasing usage of English has many benefits but at the same time it has its downside.
Having a global language, the barrier to communication that having different languages pose can be overcome. There is no doubt that English is the current lingua franca just as French, German and Arabic, among other languages, have been before. Just like many of the lingua francas of the past, English has been spread through colonization and this... Köp tillgång för att läsa mer Redan medlem? Logga in

Material relaterade till English Language in the World | Essay.