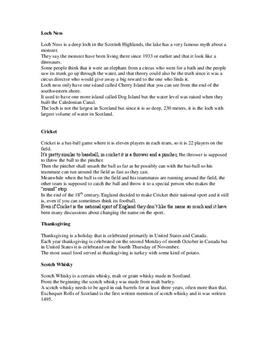 "Loch Ness:
Loch Ness is a deep loch in the Scottish Highlands, the lake has a very famous myth about a monster.
They say the monster have been living there since 1933 or earlier and that it look like a dinosaurs.
Some people think that it were an elephant from a circus who went for a bath and the people saw its trunk go up through the water, and that theory could also be the truth since it was a circus director who would give away a big reward to the one who finds it."... Köp tillgång för att läsa mer Redan medlem? Logga in