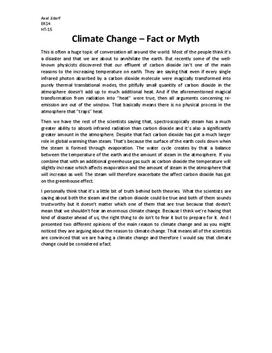 This is often a huge topic of conversation all around the world. Most of the people think it's a disaster and that we are about to annihilate the earth. But recently some of the well-known physicists discovered that our effluent of carbon dioxide isn't one of the main reasons to the increasing temperature on earth. They are saying that even if every single infrared photon absorbed by a carbon dioxide molecule were magically transformed into purely thermal translational modes, the pitifully small quantity of carbon dioxide in the atmosphere doesn't add up to much additional heat. And if the aforementioned magical transformation from radiation into ‘'heat'' were true, then all arguments concerning re-emission are out of the window... Köp tillgång för att läsa mer Redan medlem? Logga in