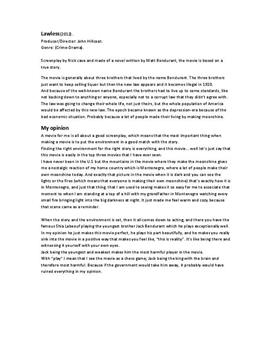 "The movie is generally about three brothers that lived by the name Bondurant. The three brothers just want to keep selling liquor but then the new law appears and it becomes illegal in 1920. And because of the well-known name Bondurant the brothers had to live up to some standards, like not backing down to anything or anyone, especially not to a corrupt law that they didn't agree with. The law was going to change their whole life, not just theirs, but the whole population of America would be affected by this new law. The epoch became known as the depression-era because of the bad economic situation. Probably because a lot of people made their living by making moonshine."... Köp tillgång för att läsa mer Redan medlem? Logga in