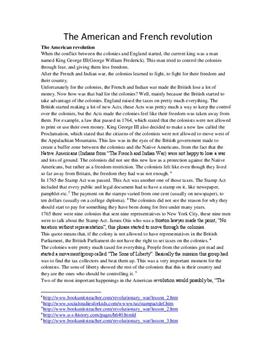 When the conflict between the colonies and England started, the current king was a man named King George III(George William Frederick). This man tried to control the colonies through fear, and giving them less freedom.

After the French and Indian war, the colonies learned to fight, to fight for their freedom and their country.

Unfortunately for the colonies, the French and Indian war made the British lose a lot of money. Now how was that bad for the colonies? Well, mainly because the British started to take advantage of the colonies. England raised the taxes on pretty much everything. The British started making a lot of new Acts, these Acts was pretty much a way to keep the control over the colonies, but the Acts made the colonies feel like their freedom was taken away from them. For example, a law that passed in 1764, which stated that the colonists were not allowed to print or use their own money. King George III also decided to make a new law called the Proclamation, which stated that the citizens of the colonists were not allowed to move west of the Appalachian Mountains. This law was in the eyes of the British government made to create a buffer zone between the colonists and the Native Americans, from the fact that the Native Americans (Indians from “The French and Indian War) were not happy to lose a war and lots of ground. The colonists did not see this new law as a protection against the Native Americans, but rather as a freedom restriction. The colonists felt like even though they lived so far away from Britain, the freedom they had was not enough."... Köp tillgång för att läsa mer Redan medlem? Logga in