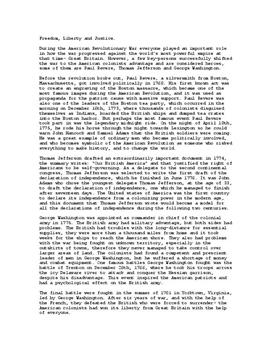 Uppgift
Read about the History of the United States of America.

From the facts and the list of keywords for further studies, write about three important events or persons in the American history. Also tell me why you chose them. The essay should be about 400-500 words.

In order to solve this task successfully you need to search for relevant information. You can use the realia handout, books, magazines, the Internet etc. You must use at least two different sources. When looking for information it is important to be a critical reader. Can the sources that you are using be trusted? Who is behind it?

You have collected interesting and relevant facts about three important people /events in American history. You present the facts in a clear and structured manner and also explain why you have chosen them. Well done!

During the American Revolutionary War everyone played an important role in how the war progressed against the world's most powerful empire at that time- Great Britain. However, a few key-persons successfully shifted the war to the American colonists advantage and are considered heroes, some of them are Paul Revere, Thomas Jefferson and George Washington.

Before the revolution broke out, Paul Revere, a silversmith from Boston, Massachusetts, got involved politically in 1768. His first known act was to create an engraving of the Boston massacre, which became one of the most famous images during the American Revolution, and it was used as propaganda for the patriot cause with massive support. Paul Revere was also one of the leaders of the Boston tea party, which occurred in the morning on December 16th, 1773, where thousands of colonists disguised themselves as Indians, boarded the British ships and dumped tea crates into the Boston harbor. But perhaps the most famous event Paul Revere took part in was the legendary midnight ride. ... Köp tillgång för att läsa mer Redan medlem? Logga in