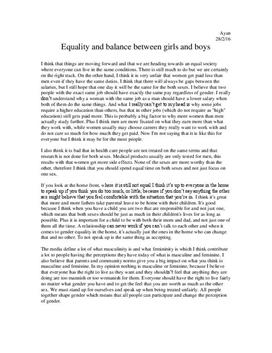 I think that things are moving forward and that we are heading towards an equal society where everyone can live in the same conditions. There is still much to do but we are certainly on the right track. On the other hand, I think it is very unfair that women get paid less than men even if they have the same duties. I think that there will always be gaps between the salaries, but I still hope that one day it will be the same for the both sexes. I believe that two people with the exact same job should have exactly the same pay regardless of gender. I really don't understand why a woman with the same job as a man should have a lower salary when both of them do the same things. And what I really can't get to my head is why some jobs require a higher education than others, but that in other jobs (which do not require as "high" education) still gets paid more. This is probably a big factor to why more women than men actually study further. Plus I think men are more fixated on what they earn more... Köp tillgång för att läsa mer Redan medlem? Logga in