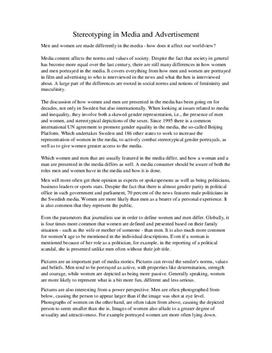 The discussion of how women and men are presented in the media has been going on for decades, not only in Sweden but also internationally. When looking at issues related to media and inequality, they involve both a skewed gender representation, i.e., the presence of men and women, and stereotypical depictions of the sexes. Since 1995 there is a common international UN agreement to promote gender equality in the media, the so-called Beijing Platform. Which undertakes Sweden and 186 other states to work to increase the representation of women in the media, to... Köp tillgång för att läsa mer Redan medlem? Logga in

Material relaterade till Gender Stereotypes in Media and Advertisement | Discussion.