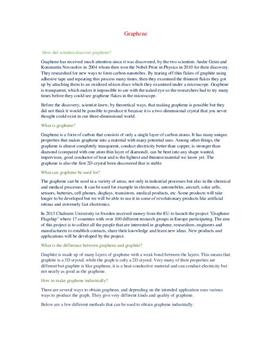 How did scientist discover graphene?
What is graphene?
What can graphene be used for?
What is the difference between graphene and graphite?
How to make graphene industrially?
How does the discovery effect society and the environment?

How did scientist discover graphene?
Graphene has received much attention since it was discovered, by the two scientists Andre Geim and Konstantin Novoselov in 2004 whom then won the Nobel Prize in Physics in 2010 for their discovery. They researched for new ways to form carbon nanotubes. By tearing off thin flakes of graphite using adhesive tape and repeating this process many times, then they examined the thinnest flakes they got up by attaching them to an oxidized silicon discs which they examined under a microscope. Graphene is transparent, which makes it impossible to see with the naked eye so the researchers had to try many times before they could see graphene flakes in the microscope.
Before the discovery, scientist knew, by theoretical ways, that making graphene is possible but they did not think it would be possible to ... Köp tillgång för att läsa mer Redan medlem? Logga in