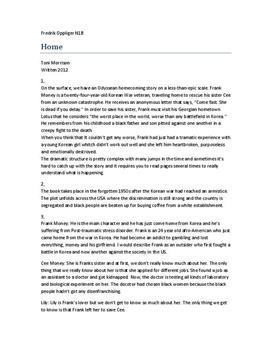 On the surface, we have an Odyssean homecoming story on a less-than-epic scale. Frank Money is a twenty-four-year-old Korean War veteran, traveling home to rescue his sister Cee from an unknown catastrophe. He receives an anonymous letter that says, “Come fast. She is dead if you delay.” In order to save his sister, Frank must visit his Georgian hometown Lotus that he considers “the worst place in the world, worse than any battlefield in Korea.” He remembers from his childhood a black father and son pitted against one another in a creepy fight to the death.
When you think that It couldn't get any worse, Frank had just had a tramatic experience with a young Korean girl whitch didn't work out well and she left him heartbroken, purposeless and emotionally destroyed.
The dramatic structure is pretty complex with many jumps in the time and sometimes it's hard to catch up with the story... Köp tillgång för att läsa mer Redan medlem? Logga in