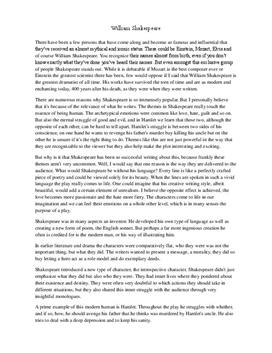 There have been a few persons that have come along and become so famous and influential that they've received an almost mythical and iconic status. These could be Einstein, Mozart, Elvis and of course William Shakespeare. You recognize their names almost from birth, even if you don't know exactly what they've done you've heard their names. But even amongst this exclusive group of people Shakespeare stands out. While it is debatable if Mozart is the best composer ever or Einstein the greatest scientist there has been, few would oppose if I said that William Shakespeare is the greatest dramatist of all time. His works have survived the torn of time and are as modern and enchanting today, 400 years after his death, as they were when they were written.
There are numerous reasons why Shakespeare is so immensely popular. But I personally believe that it's because of the relevance of what he writes. The themes in Shakespeare... Köp tillgång för att läsa mer Redan medlem? Logga in