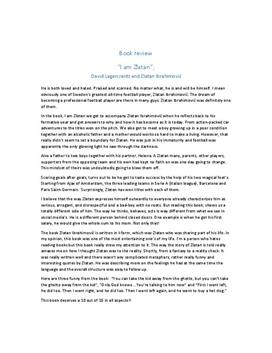 I Am Zlatan Ibrahimovic | Recension

He is both loved and hated. Praised and scorned. No matter what, he is and will be himself. I mean obviously one of Sweden's greatest all-time football player, Zlatan Ibrahimović. The dream of becoming a professional football player are there in many guys. Zlatan Ibrahimović was definitely one of them.
In the book, I am Zlatan we get to accompany Zlatan Ibrahimović when he reflects back to his formative year and get answers to why and how it has become as it is today. From action-packed car adventures to the titles won on the pitch. We also get to meet a boy growing up in a poor condition together with an alcoholic father and a mother would works so hard to make a living. However, .... Köp tillgång för att läsa mer Redan medlem? Logga in

Material relaterade till I Am Zlatan Ibrahimovic | Recension.