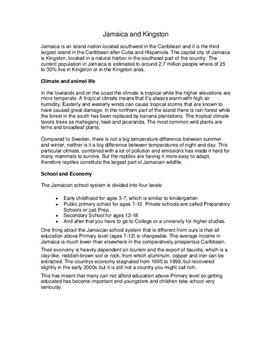 Jamaica is an island nation located southwest in the Caribbean and it is the third largest island in the Caribbean after Cuba and Hispaniola. The capital city of Jamaica is Kingston, located in a natural harbor in the southeast part of the country. The current population in Jamaica is estimated to around 2,7 million people where of 25 to 30% live in Kingston or in the Kingston area.

In the lowlands and on the coast the climate is tropical while the higher elevations are more temperate. A tropical climate means that it's always warm with high air humidity. Easterly and westerly winds can cause tropical storms that are known to have caused great damage. In the northern part of the island there is rain forest while the forest in the south has been replaced by banana plantations. The tropical climate favors trees as mahogany, teak and jacaranda. The most common wild plants are ferns and broadleaf... Köp tillgång för att läsa mer Redan medlem? Logga in