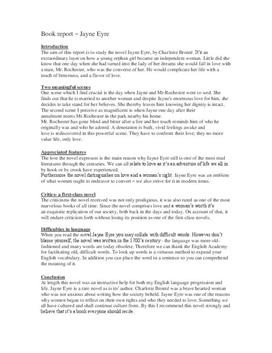 "Introduction
The aim of this report is to study the novel Jayne Eyre, by Charlotte Bronté. It's an extraordinary layer on how a young orphan girl became an independent woman. Little did she know that one day when she had turned into the lady of her dreams she would fall in love with a man, Mr. Rochester, who was the converse of her. He would complicate her life with a touch of bitterness, and a flavor of love.

Two meaningful scenes
One scene which I find crucial is the day when Jayne and Mr. Rochester were to wed. She finds out that he is married to another woman and despite Jayne's enormous love for him, she decides to take stand for her believes. She thereby leaves him knowing her dignity is intact."... Köp tillgång för att läsa mer Redan medlem? Logga in