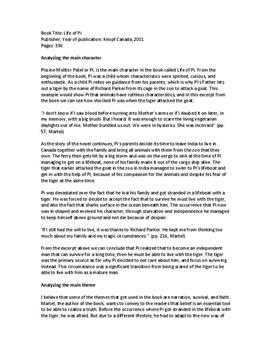 Piscine Molitor Patel or Pi, is the main character in the book called Life of Pi. From the beginning of the book, Pi was a child whom characteristics were spirited, curious, and enthusiastic. As a child Pi relies on guidance from his parents, which is why Pi's Father lets out a tiger by the name of Richard Parker from its cage in the zoo to attack a goat. This example would show Pi that animals have ruthless characteristics, and in this excerpt from the book we can see how shocked Pi was when the tiger attacked the goat:

''I don't know if I saw blood before turning into Mother's arms or if I daubed it on later, in my memory, with a big brush. But I heard. It was enough to scare the living vegetarian daylights out of me. Mother bundled us out. We were in hysterics. She was incensed'' (pp. 57, Martel)

As the story of the novel continues, Pi's parents decide its time to leave India to live in Canada together with the family and bring all animals with them from the zoo that they own. The ferry then gets hit by a big storm and was on the verge to sink at the time of Pi managing to get on a lifeboat... Köp tillgång för att läsa mer Redan medlem? Logga in