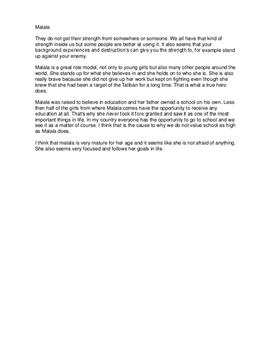 They do not get their strength from somewhere or someone. We all have that kind of strength inside us but some people are better at using it. It also seems that your background experiences and destruction's can give you the strength to, for example stand up against your enemy.

Malala is a great role model, not only to young girls but also many other people around the world. She stands up for what she believes in and she holds on to who she is. She is also really brave because she did not give up her work but kept on fighting even though she knew that she had been a target of the Taliban for a long time. That is what a true hero does.

Malala was raised to believe in education and her father owned a school on his own. Less then half of the girls from where Malala comes have the opportunity to receive any... Köp tillgång för att läsa mer Redan medlem? Logga in

Material relaterade till Malala as a Role Model | Discussion essay.