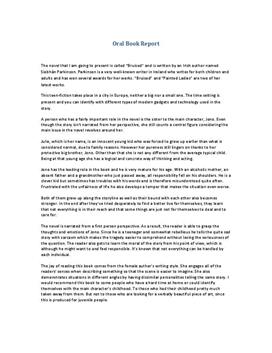 The novel that I am going to present is called “Bruised” and is written by an Irish author named Siobhàn Parkinson. Parkinson is a very well-known writer in Ireland who writes for both children and adults and has won several awards for her works. “Bruised” and “Painted Ladies” are two of her latest works.

This teen-fiction takes place in a city in Europe, neither a big nor a small one. The time setting is present and you can identify with different types of modern gadgets and technology used in the story.

A person who has a fairly important role in the novel is the sister to the main character, Jono. Even though the story isn't narrated from her perspective, she still counts a central figure considering the main issue in the... Köp tillgång för att läsa mer Redan medlem? Logga in