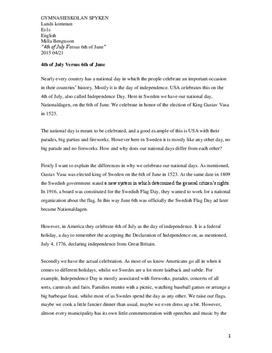 Nearly every country has a national day in which the people celebrate an important occasion in their countries' history. Mostly it is the day of independence. USA celebrates this on the 4th of July, also called Independence Day. Here in Sweden we have our national day, Nationaldagen, on the 6th of June. We celebrate in honor of the election of King Gustav Vasa in 1523.

The national day is meant to be celebrated, and a good example of this is USA with their parades, big parties and fireworks. However here in Sweden it is mostly like any other day, no big parade and no fireworks. How and why does our national days differ from each other?

Firstly I want to explain the differences in why we celebrate our national days. As mentioned,
Gustav Vasa was elected king of Sweden on the 6th of June in 1523. At the same... Köp tillgång för att läsa mer Redan medlem? Logga in

Material relaterade till National Day in Sweden and USA | Jämförelse.